In the past decade, Bill Capodagli has become the most sought after keynote speaker on the cultures of Disney and Pixar, specifically how Walt Disney’s original success credo – Dream, Believe, Dare, Do – may be implemented in organizations from manufacturing to banking to government.

With over three decades of management consulting and corporate research expertise, Bill Capodagli co-authored The Disney Way: Harnessing the Management Secrets of Disney in Your Company.  Fortune magazine cited The Disney Way as a “Best Business Book” and “so useful, you may whistle while you work.”  Entrepreneur magazine cited the book as “One of the FIVE books to Read Before Starting Your Business.”

In 2016, McGraw-Hill released the 3rd edition of The Disney Way featuring many exciting organizations – TYRA Beauty, Science Center of Iowa, and Ottawa County, Michigan and others – that Bill Capodagli has guided to produce customer-centric cultures.

Bill also co-authored the definitive account of Pixar’s creative culture – Innovate the Pixar Way: Business Lessons from the World’s Most Creative Corporate Playground; Leading at the Speed of Change: Using New Economy Rules to Invigorate Old Economy Companies as well as the enormously popular The Disney Way Fieldbook: How to Implement Walt Disney’s Vision of “Dream, Believe, Dare, Do” in Your Company.

Prior to co-founding Capodagli Jackson Consulting in 1993, Bill held managerial positions at the consulting firms of AT Kearney, and Ernst & Whinney (now Ernst and Young). Bill was a director on the Extended Services faculty of the University of Southern Indiana from 1991-1993 and presented The Disney Way principles to a vast client base. Bill holds degrees in economics and mathematics from Illinois State University.

Bill’s expertise in leadership, innovation and customer service has been the catalyst for transforming the cultures of numerous organizations.

Lynn Jackson is the internationally recognized co-author of The Disney Way: Harnessing the Management Secrets of Disney in Your Company; The Disney Way Fieldbook: How to Implement Walt Disney’s Vision of “Dream, Believe, Dare, Do” in Your Company; Leading at the Speed of Change: Using New Economy Rules to Invigorate Old Economy Companies; and Innovate the Pixar Way: Business Lessons from the World’s Most Creative Corporate Playground. In 1993, she co-founded Capodagli Jackson Consulting with Bill Capodagli.

For over two decades, Lynn has been assisting organizations develop productive teams and produce sustainable customer service cultures based on Walt Disney’s success credo. Lynn holds degrees in psychology (B.S.) and counseling (M.S.) from Ball State University, and instructional systems technology/organizational development (M. S.) from Indiana University.  At Indiana University, she was certified by the Center for Applications of Psychological Type as a Myers-Briggs Type Indicator Administrator. She is a past board member of the Indianapolis chapter of the American Society for Training and Development. 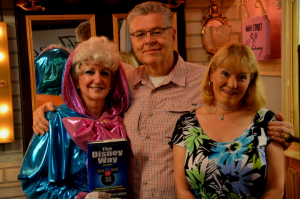